​Kevin Kiernan is T. Marshall Hahn Senior Professor of Arts & Sciences Emeritus at the University of Kentucky. He spent his entire 35-year career (1970-2005) in the Department of English at UK, specializing in Old and Middle English language and literature as well as digital humanities.

Kiernan received his bachelor’s in English from Fairfield University, and both his master’s and doctorate in medieval studies from Case Western Reserve University. He was made a full professor at UK in 1981, served as chair of Department of English from 1986 to 1990 and was elected Distinguished Professor of Arts & Sciences in 1999. Kiernan earned grants and fellowships from such groups as the American Philosophical Society, the National Endowment for the Humanities, The National Science Foundation, IBM and the Andrew W. Mellon Foundation. In 1992, in collaboration with students and colleagues from across the University, Kiernan founded the Collaboratory for Research in Computing for Humanities, which provides infrastructure and support for faculty undertaking projects in the digital humanities.

His first book, Beowulf and the Beowulf Manuscript, revolutionized the dating of Beowulf and established him as a leading authority on the manuscript. Kiernan was asked to produce an electronic edition of this treasure by the British Library in 1992. Now in its 4th edition, the Electronic Beowulf is available for free online, hosted by the University of Kentucky. Its 21st anniversary was celebrated in three sessions in Kiernan's honor at the 2014 International Medieval Congress at Western Michigan University.

Today Kiernan lives with his wife, Aidine, on St. Simons Island, Georgia. He continues to research, write, publish and lecture on medieval topics, digital humanities and coastal history and archaeology. His favorite pastime is playing with his seven grandchildren. 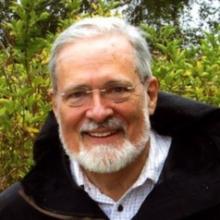