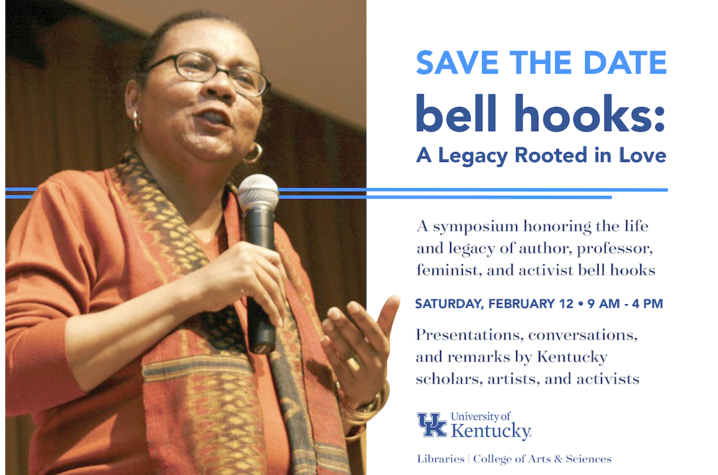 This symposium will celebrate the life and legacy of bell hooks, UK Libraries' 2021 Medallion for Intellectual Achievement recipient and  author, professor, feminist and activist.

The event is open to the public. To RSVP for the event, please click here.

Proclaimed as “one of the preeminent feminist voices of our time,” bell hooks was Professor in Residence in Appalachian Studies at Berea College up until she died in December 2021. She also taught at the University of Southern California, Yale University, Oberlin College and the City College of New York, publishing more than 30 books of poetry, fiction and critical essays. Her work garnered several prestigious awards, including the American Book Award, an Image Award nomination from the NAACP and a Children’s Book of the Year designation .

Throughout the symposium, scholars, artists and activists from acrossKentucky will present and engage in conversations that celebrate and reflect on hooks’ work and its impact on literature and critical thought. Featured speakers include:

The UK Libraries Medallion for Intellectual Achievement was created in 1990 to recognize high intellectual achievement by a Kentuckian who has made a contribution of lasting value to the Commonwealth. The award also promotes education and creative thought. The recipient is determined by majority vote of the UK Libraries National Advisory Board.