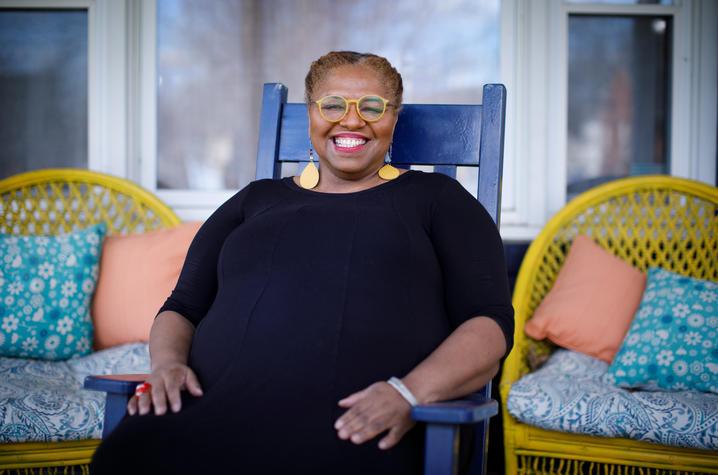 Wilkinson, an English professor in the College of Arts and Sciences at the University of Kentucky, will be inducted as part of the Kentucky Writers’ Day celebration. The virtual ceremony will be held at 10 a.m. on April 23 on the Kentucky Arts Council’s Facebook page and YouTube channel.

Wilkinson is the first Black woman to be appointed as the state’s poet laureate.

“It feels glorious to be named Kentucky Poet Laureate. It feels like a validation of my life’s work. I feel very proud as a woman of letters in the state. When I looked at the list, it’s wonderful to be a part of that legacy,” she said. “Sena Naslund was a mentor for a number of years. James Baker Hall was an advocate for my work. George Ella (Lyon) also has advocated for my work. Certainly Frank (X Walker) and Gurney (Norman) are others I value. It feels like coming home to be part of the legacy of Kentucky letters.”

Born in Hamilton, Ohio, Wilkinson’ moved with her family to Kentucky when she was 6 weeks old. Growing up in Casey County, she cultivated a love of literature and reading from an early age. Her grandmother read to her every day. One book, “Where the Red Fern Grows” by Wilson Rawls, acted as a gateway to her career in writing.

“I always come back to this book. At the time, there weren’t many African American books I was exposed to,” Wilkinson said. “This was the first time I saw myself in a book. It was my first foray into imagination.”

Wilkinson is the award-winning author of “The Birds of Opulence,” winner of the 2016 Ernest J. Gaines Prize for Literary Excellence; “Water Street;” and “Blackberries, Blackberries.”

Nominated for both the Orange Prize and the Hurston/Wright Legacy Award, she has received recognition from the Kentucky Foundation for Women, the Kentucky Arts Council, the Mary Anderson Center for the Arts and the Fine Arts Work Center in Provincetown, and is a recipient of the Chaffin Award for Appalachian Writing.

Wilkinson has been nominated for a Pushcart Prize, and her short stories, poems and essays have appeared in numerous journals and anthologies, including most recently in the Oxford American and Southern Cultures.

In the summer of 2018, “The Birds of Opulence” was included in Book Benches: A Tribute to Kentucky Authors, a collaboration between Arts Connect, LexArts and the Carnegie Center for Literacy and Learning. The public art project featured 36 functional, book-shaped benches — each illustrated and themed around a different work by a Kentucky author. The benches were placed throughout Lexington to encourage reading and provide a place for rest. Wilkinson’s bench was installed along South Limestone in front of the University Press of Kentucky office.

Additionally, “The Birds of Opulence” has been selected by Kentucky Humanities for its Kentucky Reads statewide book discussion program.

Wilkinson’s next book, “Perfect Black,” will be released in August.

During her tenure as poet laureate, Wilkinson wants to hear the stories of her fellow Kentuckians from all walks of life. “I hope to amplify the wondrous variety of Kentucky stories by going to libraries, either via Zoom or in-person,” she said. “I’m interested in stories from different cultures.”

Wilkinson also hopes to be an inspiration to young people with an eye toward a career in writing, while also connecting with senior community members.

“One of the misfortunes of me coming up as a blossoming writer was that I didn’t see anyone who looks like me at all,” she continued. “I’m hoping that young girls can see they, too, can be writers, as well as all people of color," she continued. "There is also wisdom in our elderly population. I’d like community centers and senior centers to put me in touch with those elders. Their stories need to heard, preserved and told.”

Kentucky Writers’ Day is celebrated annually on or around April 24, the birthday of Guthrie, Kentucky, native Robert Penn Warren, the first United States Poet Laureate. In odd numbered years, the governor appoints a poet laureate to a two-year term. That person acts as Kentucky’s literary ambassador, leading the Commonwealth in a variety of literary activities and events throughout their tenure.

As an ongoing celebration of Kentucky Writers’ Day, the Kentucky Arts Council will feature videos submitted by Kentucky writers reading their own works. Details about how to participate will be forthcoming on the arts council’s social media platforms.