Socialist revolutionaries have claimed that overcoming the bourgeois system would usher in a new way of life where the free development of each person is a condition for the free development of all. Life in this classless society would be marked by liberty, equality and solidarity. The appeal of these universally recognized ends both captured the imagination of those who believe there must be final political solution to all human ills and justified whatever actions were deemed necessary for bringing this situation into existence. And yet, in each and every instance, politically empowered socialism has produced a system of servitude, inequality and suspicion, where the life of a dissenter is solitary, poor, nasty, brutish and short. Socialism’s inevitable failure makes a critical re-examination of the means appropriate to the pursuit of these ends all the more important today.

Co-sponsored with the Departments of History, Philosophy, and Political Science. 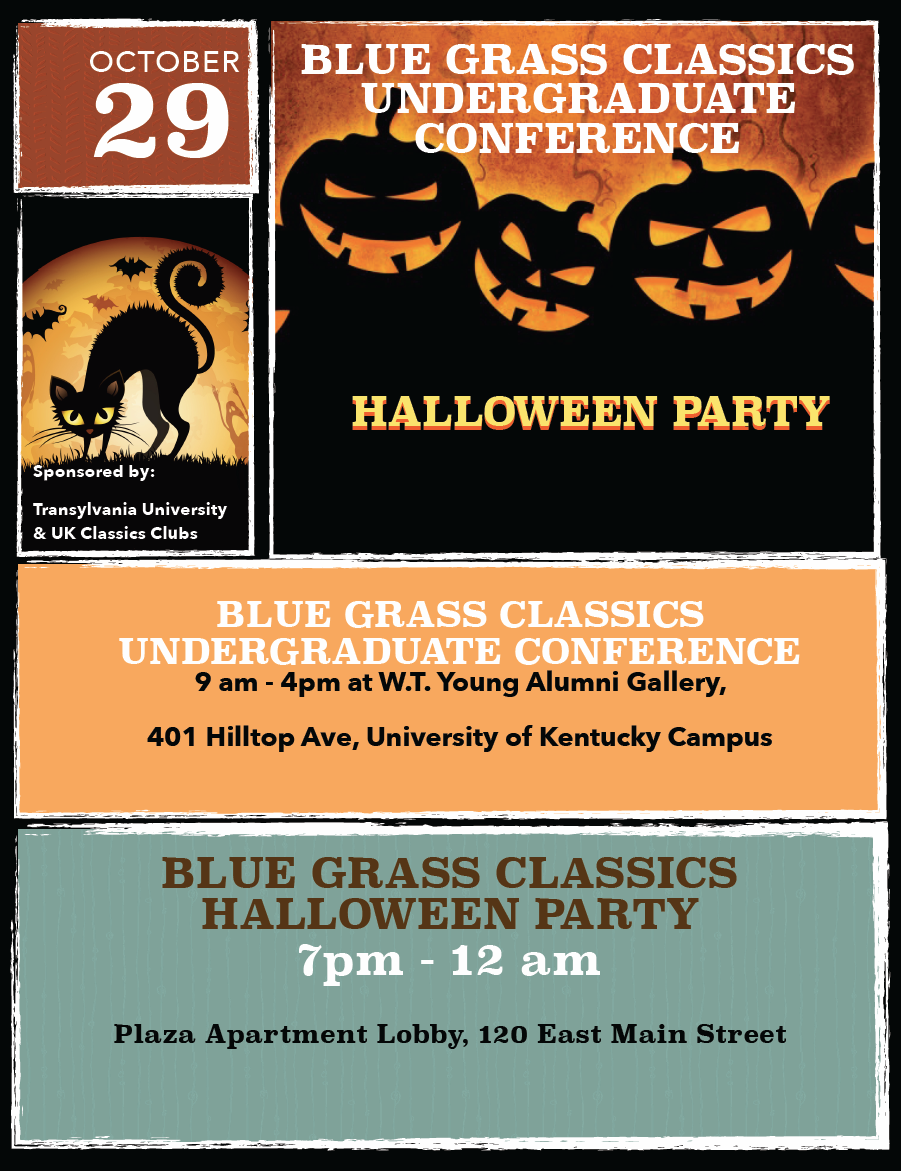 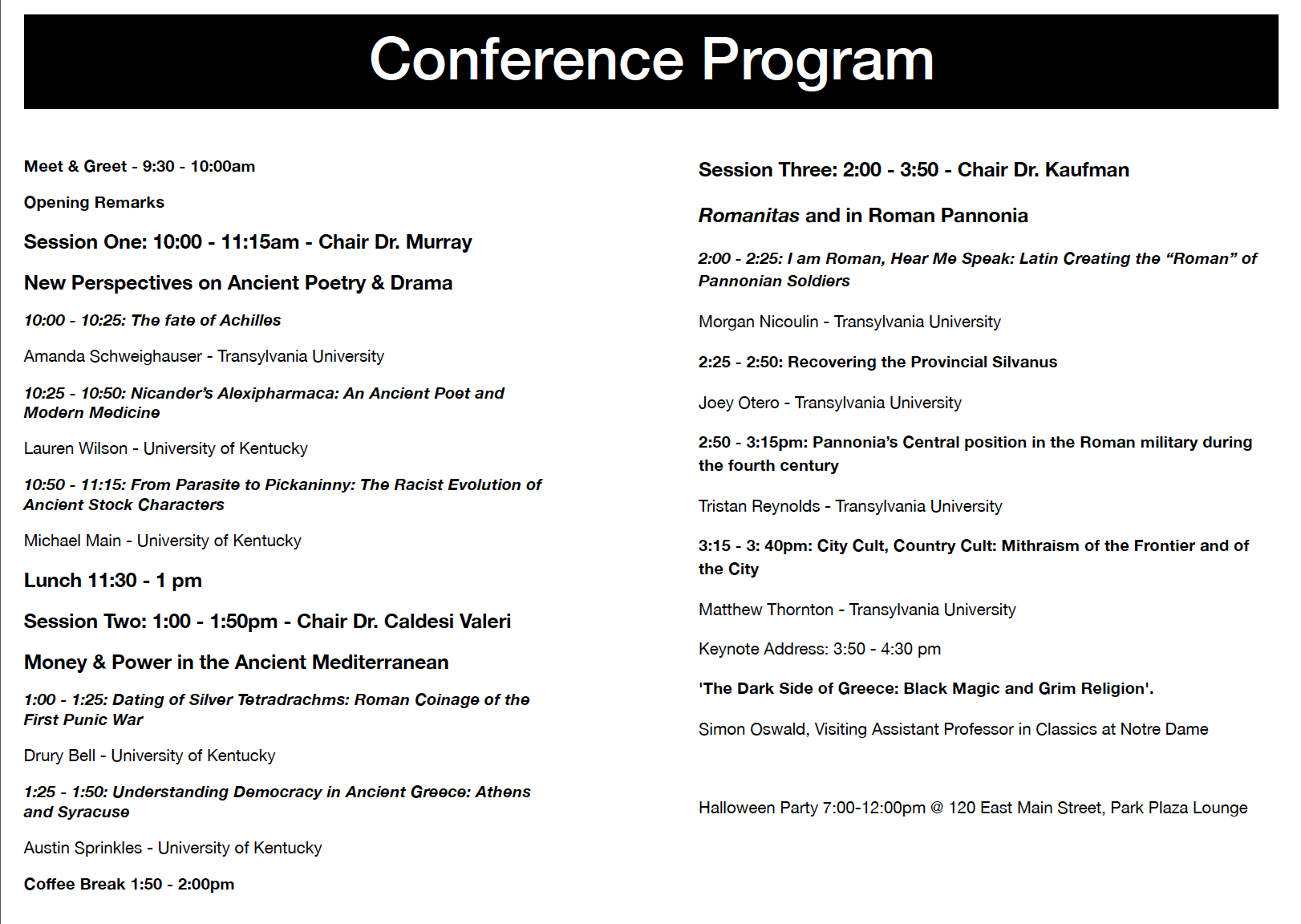 Twenty-three women at the University of Kentucky have been nominated for the 2016 Sarah Bennett Holmes Award, and registration is underway now to attend the award ceremony and luncheon 11:30 a.m. Thursday, March 10, at the Hilary J. Boone Center.

Keynote Speaker: Professor Iain Thomson, University of New Mexico, will give his talk "Phenomenology, Technology, and the Political"

"Yinyang: The Way of Ways"

Join the University of Kentucky Confucius Institute (UKCI) in welcoming Dr. Robin R. Wang as the first speaker in the 2015 Distinguished Scholars Series. Her lecture, entitled Yinyang: The Way of Ways, and discussion will take place on Friday, Oct. 16 from 2:30 - 4:00 pm in the Patterson Office Tower 18th Floor, West-End Lobby, with a reception to follow. Please see the attached poster for more information.

You're 40, reminiscing with college friends about a memorable experience from 20 years ago.  One of them confesses that, just 10 years ago now, he broke into your house and kidnapped the person sleeping in your bed to use as an unwitting subject in a secret government fission project.  Lefty and Righty were successfully issued in one of the usual ways; but never woken up.  Righty was promptly destroyed, and Lefty was returned to your bed, still unconscious and none the wiser.  Here are two ways you might reply to your friend's confession.  1) I'm mad that you took such a terrible risk without consulting me, but thank goodness everything turned out okay.  2) I'm sad that my total life expectancy is 30 years shorter than I'd thought, but thanks for creating me.  I find the first reply much more natural than the second.  But I'm also terrified by the prospect of fission.  Leading theories of personal survival have a hard time accommodating both (a) the retrospective intuition that you've survived fission, and (b) the prospective intuition that it's indeterminate whether you'll survive fission.  In this talk, I show that we can coherently combine (a) and (b) by characterizing survival in terms of existence at a time, instead of numerical identity over time.  A simple exdurantist or stage-theoretic model can be used to illustrate consistency.  And taking care to distinguish the object language of the theory itself from the metalanguage we use to model it helps neutralize potential objections, and clarify certain confusions in the traditional literature on personal identity.  Zooming further out, these considerations suggest that Lewis may have been wrong to claim that fission and kindred puzzles of persistence aren't essentially "about identity".  Here and elsewhere in metaphysics, the way forward may involve outgrowing the habit of defining our theoretical options in terms of identity.

"Recognition and Identity: A Hegelian Response to Contemporary Critics"

Starting in the early 1990’s with the publication of Axel Honneth’s landmark book The Struggle for Recognition and Charles Taylor’s seminal essay “The Politics of Recognition”, there has been a resurgence of interest in what might broadly be called “recognition theory,” a tradition with roots in Fichte and Hegel. It is my contention, however, that there are some important and recurring weaknesses in much of this recent literature on recognition that causes it to provide what is ultimately a flawed account of oppression and liberation. Patchen Markell’s Bound by Recognition, in particular, stands as an excellent exemplar of this general trend in the recent literature.  Using his work as a paradigm case, this paper will articulate a response to Markell’s critique of recognition theory that I believe is representative of general weaknesses in much of the contemporary discussions of the topic. I will argue that these contemporary critics are working with a deep, yet common, misreading of the Hegelian roots of recognition theory, and that a return to Hegel's texts will allow for an account of recognition that holds more promise for the theorization of oppression and liberation.