Jim and I arrived in Israel last Thursday afternoon around 2pm, and we had the good fortune to be picked up at the airport by our dear friend Shlomi (who will get a separate blog post dedicated only to him in a few days—keep an eye out!).  Of course, since many Israelis drive cars that are smaller than American ones, Jim had a concern that our luggage might not fit in Shlomi’s car. In the end, I confess, there actually were five pieces: 1 big packpack and one garment bag for Jim, 1 big suitcase, 1 small duffel carry-on (whose straps broke from the weight of my Arabic language-learning books and which I had to replace with a rolling carry-on in the BWI airport!), and one backpack full of electronic devices for me.  But it all fit. 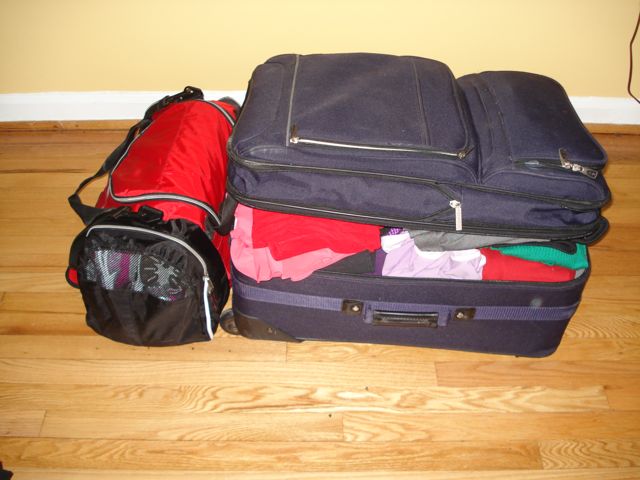 I began this blog hoping to keep more of a travel log, and to shy away from the prickly politics of the region. In thinking about how to write today’s post,  however, I have realized it will be impossible to talk solely about the delicious food we eat and the wonderful people we meet (more on both in coming posts). It will be impossible to avoid the seemingly unavoidable—the conflict(s) lurking around the corners: between religious and secular, Palestinians and Jewish Israelis, native born Israelis and recent immigrants, Mizrachim and Ashkenazim, and….the list will continue to grow, I assure you.

We’ve been in Jerusalem for a good five days, and even the most mundane, everyday interactions involve encounters with all kinds of others and all manner of othering.    However, one thing that embracing the role of traveler allows, is the ability to look critically at these others and methods of othering, and this blog allows me to call attention to these observations.

Take the simple act of driving from Tel Aviv to Jerusalem on the commuter highway 443, for example.  Unlike in the States, where highways are simply highways, and everyone can drive on them, regardless of who you are or what your license plate says, in Israel, the PA, and the areas in between, there are two worlds on the road. In fact, roads are some of the most contested spaces, because they provide access to resources, families, work, and because they have been the vehicle for violence, boundary maintenance, and separation. One of the big differences is in the license plates: Israeli license plates are long and yellow with black numbers and letters,

whereas Palestinian license plates are white with green lettering  or green with white lettering. The following photo was culled from Jennifer's blog.

We are not driving along the 443 for long before Shlomi points out that the road had been closed to Palestinians from 2002-2010. It only reopened, we learned, because Israel's High Court of Justice [their version of the U.S. Supreme Ct.]  “accepted the Association for Civil Rights in Israel's petition against an IDF order barring Palestinians from driving on Highway 443” on December 29, 2009 (Wikipedia).  The ruling didn’t go into effect, however, until May 28, 2010, which was the first time Palestinians were allowed to use the road since 2002, “when it was closed following Palestinian attacks on Israeli motorists during the Second Intifada” (Wikipedia).

As we drive by, Shlomi points out the small section of the road that is now open to Palestinians, and the Separation Barrier  that lines either side, blocking the Palestinian villages it obstructs from the casual driver’s or passenger’s view. 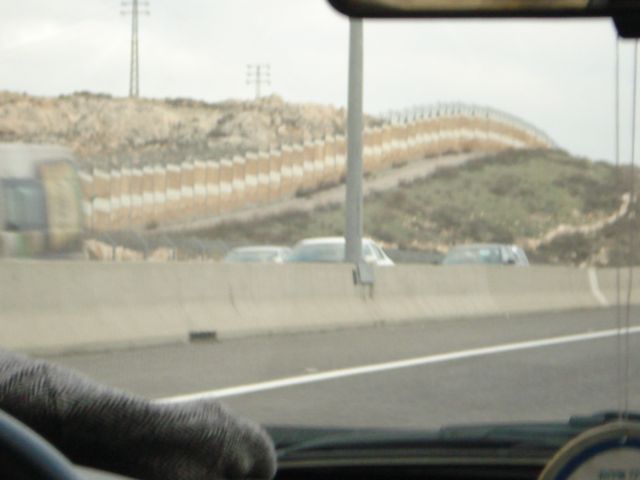 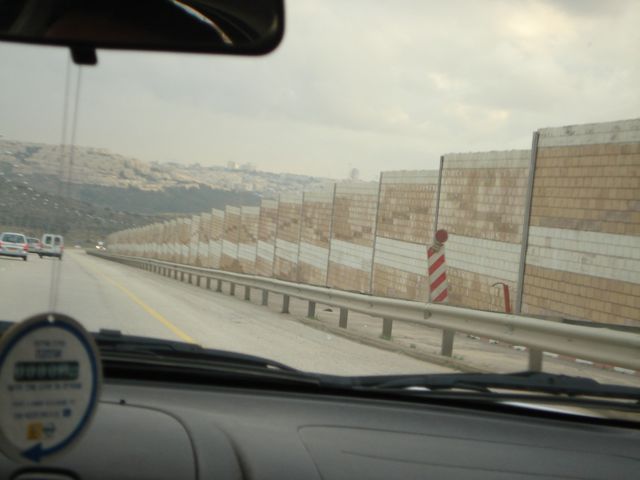 The Separation Barrier was, as this name implies, built by the Israelis to separate Israel from the West Bank.   As we drive, the sun begins to set, and we catch up. As we talk about our families, our projects, our day’s experiences,  I’m reminded that Shlomi and I met 12 years ago on the day the Camp David talks failed.  We had been corresponding about apartments before I arrived in 2000, and even though I opted not to live on Givat Tzarfatit (French Hill, the neighborhood surrounding Hebrew University) as his roommate, we decided to meet in person anyway, and have been good friends ever since. It’s funny to me how our close friendship is framed by these very “BIG” political events, and how even an American like me  can have such personal connections with very public history. In any case,  it’s good to be met by a good friend after a long flight, and it’s even better to share a warm meal, on a chilly Jerusalem night. 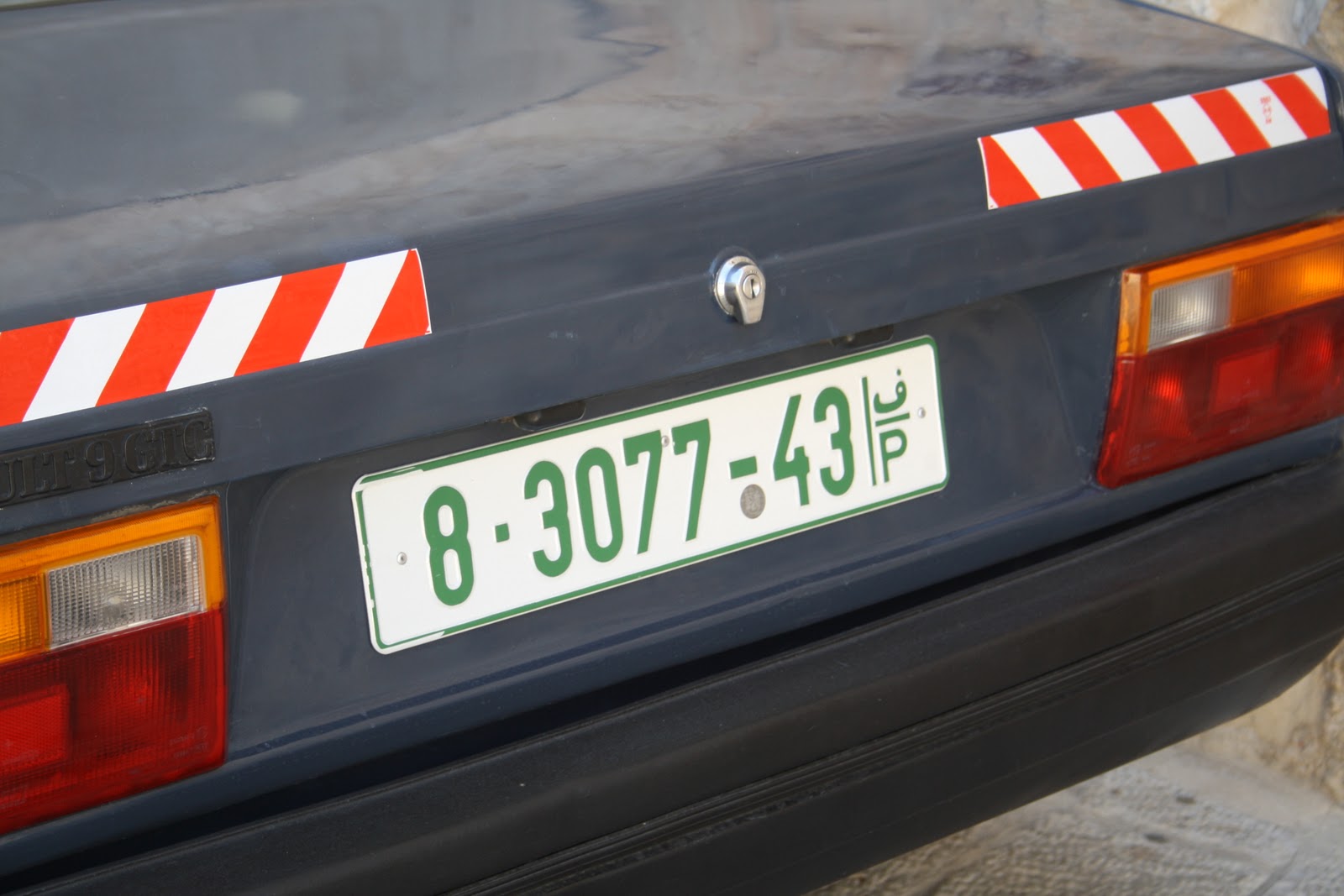